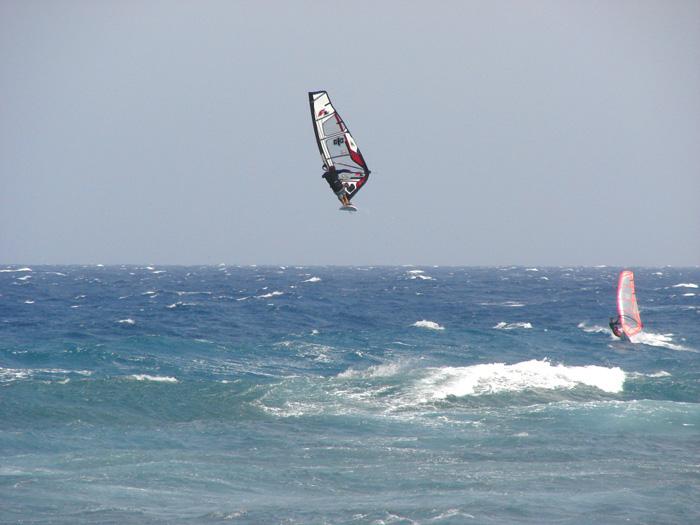 At the age of only 16 years, Dany was highly traded as one of the most talented newcomers of the sport. Just having achieved a full sponsorship by Fanatic / Arrows, he disappeared as quick as he showed up at the International Circuit. Never have been focussing totally on Windsurfing, he still has many titles to show up: Spanish Champion, Canarian Champion, Junior Worldchampion Wave Production Boards, 18th Worldranking Wave, 3th Soulwave Windsurfing, 2th Soulwave Overall.

Dany is a extremely talented Windsurfer. On the surfboard, Dany has not to hide either. He is well known by the Canarian Surfers, specially for his big balls when the surf gets massive. He is a good tuberider, but even slashing very technical tricks on his surfboards. In Windsurfing he has a very powerful and radical, but in the same time a very fluid style what makes everything look so easy!...He is - even at the Worldcups - one the ones which jump at the highest Floors. A quick shortcut through his standardmoves: extreme high Backloops, one handed and onehanded one footed, extremely tweaked PushloopTabletops, stalled Forwards in the 4th floor, dry wave 360 front and backside, tweaked Aerials, just to name some moves. After many years of hard work, family problems and sailing only in the evenings after work, and weekends, Dany has now decided to focus at windsurfing at the age of 26 years, to attack again at the PWA Worldtour. We spoke to Dany about his career, family, friends, Tenerife, his plans and much more.

WT.com: Dany, where are you from?
Dany: My parents are German. They have been living already in Liberia ( Afrika ) for 7 years when i was born. I was born in Wilhelmshaven / Germany, but when i was 2 months old, my parents took me with them to Liberia. I went together with my smaller sister to a German school there. It was a great place to grow up. My playground was the beach in front of our house.

WT.com: And why do you speak then perfect spanish?
Dany: When i was 8 years old, my parents moved from Liberia to Tenerife. My father opened a business for satellite TV on the island. The business went well and everything was fine. So i went to school at Tenerife from our arrival on.

WT.com: How did you start Windsurfing?
Dany: I first started surfing and loved it. Then some friends teached me how to windsurf. I loved it from the first day. Many sailors told me that i was learning very quick and that i had lots of talent. That motivated me as well.

WT.com: I heard that you learned to control for example the forward loop the first year you started Windsurfing. Is that true?
Dany: To be honest, i think it was like that, but here on Tenerife you can sail nearly every day, so you cant compare this with somebody which has to wait several days or weeks for the next session. That helps everyone to improve quicker.

Dany started to compete at local and national contests. Won several titles and was one of the most promising young sailors worldwide. Fanatic and Arrows recognized that as well and signed his first professional Sponsorship. At the age of only 17 he won the Junior Worldchamp Title for production waveboards. Among many other young sailors which now are full professional sailors, like for example Julien Taboulet. This was one side of his life. On the other hand, there happened something which is goanna turn everything upside down.

As the support from his sponsors is a good help, but not enough to live of it, Danys is obliged to start working after finishing Highschool. Danys father was never really enthusiastic and helpful to his career. He always wanted Dany to follow his footsteps and saw Windsurfing as a hobby. He didnt understand about Danys love to the sport and extraordinary talent as a sailor. He started working together with his father and his employees at the family business.
Then, after 20 years of marriage, Danys parents got divorced. His father decides to go back to Germany. Dany cant see another way then working as hard as possible to be able to overtake the business from his father as quick as possible. Not because he wanted to earn lots of money, simply because he, his mother and his younger sister needed an income to pay their bills. But now there was nearly no time left for sailing. Only at Saturday afternoons and Sundays. The sponsors for sure were not amused to see that their sailor, they handled as a possible future Worldchampion, was not competing anywhere and beeing nearly never on the water. How should he have been doing so? He needed to make sure to be able to look for his mother and smaller sister.

WT.com: Dany, do you regret sometimes that you decided to start working for your father and not to concentrate on Windsurfing at the age of 18, having a professional Sponsorship ?
Dany: Regret sometimes? It drives me crazy now, many years later, every time i think about what a great chance i have left passing by! If i think about it now, i shouldnt have let my father influence so much in my life. Possibly i could be now one of the TopSailors on the tour and be able to live of my sponsorsship contracts. And every day do what i liked most. I guess its better to not think about it too much.

WT.com: Your Homespot is El Medano, or better said the El Cabezo Beach of El Medano. There are many european sailors coming for training and holidays as well. Why is it good to sail there?
Dany: Already with Lightwind for 5,0m2 there are good size waves normally, which just break in front of an old bunker on a lava reef. If the wind blows some days - always sideonshore from the left - there are 100% at least 3m waves for jumping and waveriding. El Medano has something for everybody. Beginners can go to the main El Medano beach, Advanced to th Harbour Wall and Experts to El Cabezo.

WT.com: How does it come - in your opinion - that most of the people think Pozo is better then Tenerife for Windsurfing?
Dany: Pozo has more windy days per year. At Gran Canaria / Pozo you can already sail with Northwind. Here in El Medano then its just calm. But if you are willing to drive, you will find spots which work when theres nothing going on in El Medano. For example - El Socorro - with Nortwind. Its similar there to Pozo and only about 20 min by car to the north from El Medano. Theres a big variety of spots for all winddirections in Tenerife. With Northwestwind for example, the wind is always a bit stronger in Tenerife then in Gran Canaria. But most of the people dont move from El Medano. I have seen in the past that you can nearly sail daily if you are willing to drive around.
On the other side theres the PWA Worlcup at Pozo each year and that brings a lot of good public relation. The last Worldcup in Tenerife was already many years ago. The good sailors as well receive more support at Pozo then we do in El Medano. Thats why everyone knows Dunkerbeck, the Jensens, Morenos...

WT.com: What about the Level of the sailor at your homespot Cabezo?
Dany: The Level is high. There are many sailors which do most of all the standard wavemanouvers. But they are not really known or famous. The most known one maybe is my friend Bart David. He was born in Belgium and lives over 12 years already at El Medano. I guess everybody which has been to Cabezo knows him. He was a long time injured, but getting better slowly. He does onehanded Pushloops or perfect Doubleloops.

WT.com: How are the condicions at Tenerife? Which stuff should i bring with me?
Dany: We have normally all the year through constant wind for 4,0 to 5,0m2 sails. If its not enough wind for 5,0m2 most of the locals anyway dont go sailing then, as there are normally not good waves. I use most of the days my 4,7m2 Gaastra Poison and my F2 Rebel 75 Liters. Thats as well my favourite gear.

WT.com: What are your plans and ideas for 2007 and 2008? What are you planning for your Windsurfing career?
Dany: I am goanna try to compete at all the PWA Events. My goals are to reach the top 5 in wavesailing. Maybe its goanna take one or the other season to achive it, but i think if train hard and give my best i can make it true. Possibly i am goanna join some smaller Wavecontests, too. If on the other hand, if there come up possibilities to do Travelstories to other spots, i wont think about it too long. Now or never.

WT.com: Thanks for your time Dany and we wish you all the best...